We have to get up early today: I phoned with a paragliding operator yesterday and they gave us quite uncomplicated green light for today. But first breakfast: I decide to have pancakes with vanilla filling, strawberries, blueberries and on top of that vanilla ice cream. Delicious. Elke looks a bit envious at my food ! She only ordered fruit with yoghurt. The next few days there will be several festivities in Kuta, so perhaps we will still have time to walk around the city after paragliding. 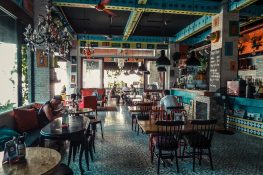 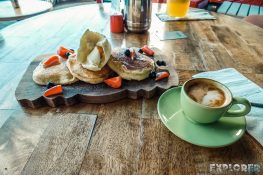 Since we still have some time till our driver arrives, we decide to visit the laundry around the corner. Quite cheap: 20000 IDR (1.39 USD) / kg is calculated here.

We get picked up on time by a white SUV and have a drive on remote gravel road up a cliff. We can see Gunung Payung Beach below us and some big waves in sea. It sure is windy up here.

Elke starts first and I follow about 15 min later. My pilot is Ketut, a very casual guy who brings in a lot of experience – you feel really safe with him. The flight itself is a great experience. Even though the 30 minutes seem to fly by very quickly, the flight is absolutely worth its money (1000000 IDR (69.38 USD) incl. pick-up).

While Elkes Pilot manages to land them safely at the departure site, we have too little upward wind to reach it. But Ketut slows us down, makes some turns and lands us easily on an empty stretch of the beach while the people there got a bit of a baffled look on their faces. 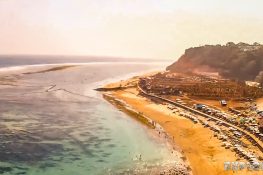 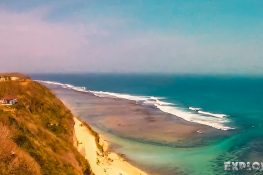 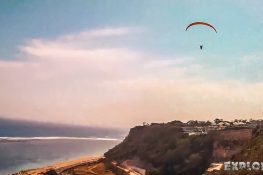 We don’t have to climb up the gravel road to the cliff again though. We pack the paragliding chute together and have a fresh pineapple juice at the beach bar while waiting for the SUV to pick us up. Elke is already in the car and the driver also picks up Ketut to get him up the cliff again. I almost feel like flying again…

Back in Kuta: Some ceremonies seem to have started already as Kuta celebrates its anniversary. Not only visitors from Bali are there, but also many Indonesians from neighboring islands. You can see a lot more women with headscarfs – visitors from Java probably. Some military and politicians also seem to be present – secured by military police there are some singers performing on a stage for them. 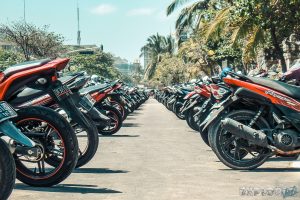 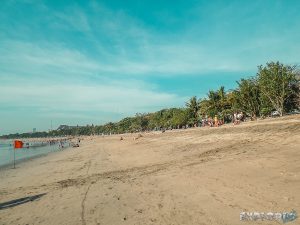 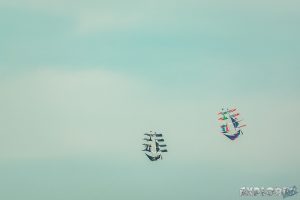 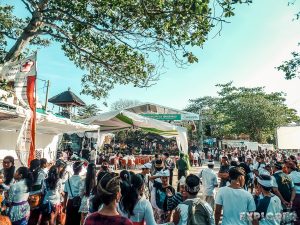 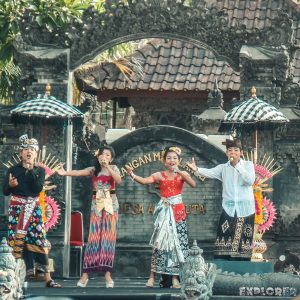 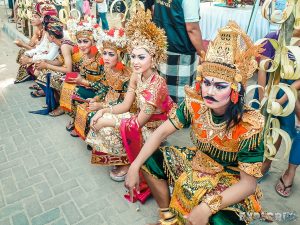 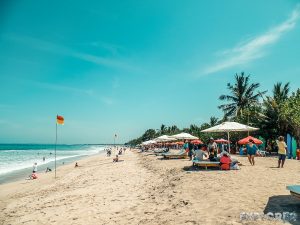 We lose the crowd and go for a walk on the beach… There are lots of pupils from Java here today and you often get approached by them. Partly because the teachers gave their classes the task to interview travelers in English, but in some cases the kids seem very interested to talk to someone from abroad. Everyone wants to speak and take photos with us – as a non-Indonesian this sure makes you almost feel like a celebrity .

In the evening, we head to the nearby street having all kinds of different streetfood for dinner. You can order quite uncomplicated, although you may get overwhelmed by the sheer amount of dishes. When it comes to paying the bill, every dish seems to be about 10000 IDR (0.69 USD) more expensive. Elke doesn’t let this go and demands to have a look at the menu again – yet she gets one on which the prices are appropriately adapted . Ok, you also get scammed here, this isn’t really worth arguing about. You have to be prepared to pay “tourist prices”. 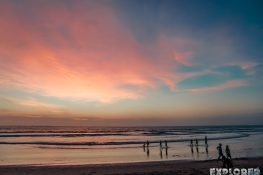 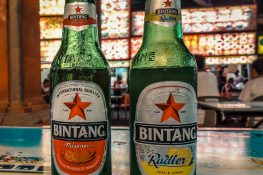 A short detour to the laundry: Our stuff isn’t ready yet, we have to pick it up tomorrow. I was a little startled as I entered the shop: I have already seen the man at the counter yesterday and he was also working here at the time we left our laundry… Does he work 24h / day? He almost looks like a ghost… 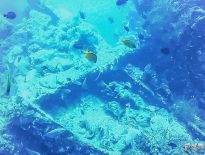 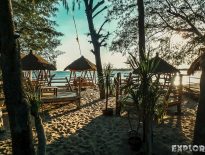