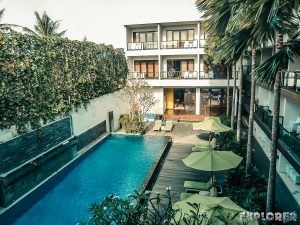 Yesterday, I called the Matahari Dive-Tulamben to ask for a scuba dive at USAT Liberty. The Liberty is not just any wreck – it is THE Wreck of Bali, the dive site (almost) every diver coming to Bali wants to see. This isn’t surprising – after all, this is one of the largest wrecks in the area, but despite that it is quite an easy dive.

Dive-Tulamben made the arrangements quite uncomplicated: The dive itself is cheaper than the ones i did on the Gilis (probably because you don’t need a boat to reach the divesite). Conveniently, a transfer is offered. In addition, we get the info that Dive-Tulamben is actually a spa resort – having lunch and relaxing after the scuba dive is also not a problem. Great.

Our driver is on time and we arrive at the dive center just as a group of divers finishes their scuba dive. Since I am the only one that is planned for a dive at that time this will be a 2-man dive, as Kevin will accompany me as a guide and buddy. But even if I was diving with a big group here, the scuba divers would have scattered around the wreck – it’s really huge. After selecting our equipment, we both put on the wetsuits and BCDs and walk a small path towards the beach – the entry point is not really that far. Also the wreck is just about 50m from the beach. Elke brings her snorkel gear along and follows us. Even while snorkeling you can see the wreck and lots of fish from above. The highest part of the wreck is just about 5m deep. 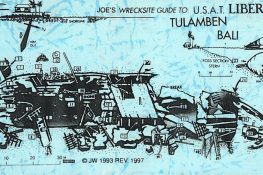 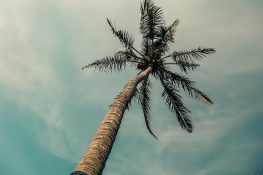 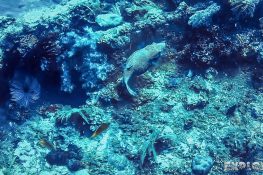