Another year goes by – time to look back on past trips. Michael from the blog “Erkunde die Welt” had this nice idea to bring back old memories of the past six months: Photoreview 1-2017 .

So what’s this all about? In this photoreview you have to present the best images you took during your travels from the first half-year 2017. There are overall 6 Categories you should pic an image to show:

This is actually the first time I’m participating – I decided to restrict my choices to the images I’ve taken on my most recent trip: Ecuador. Deciding which images to post wasn’t easy. On the other hand I was kinda forced to finally sort out the taken images and give them the last finishing touch with Lightroom…

At first, I was about to choose another picture - more like a simple snapshot which would have been a rather "exceptional" motive in every country. Yet, looking back at all the photos I took during the Ecuadortrip I simply had to choose a Graffiti.

Every city we visited in the Andes had multiple Murals and Graffiti. There is a saying here: "No wall is white in Ecuador" - and Ecuador's walls are indeed colorfully covered with Graffiti and not just the mediocre fast-scribbled tagging you can see everywhere. Ecuadors capital and UNESCO world heritage Quito has its own story to tell just by looking at the city's walls: Lots of murals contain quotes, sayings and social&political messages. Having a ride with one of the Trolebús through this town feels like being in an open-air museum: You can admire some of world's biggest murals here, for example in Floresta, Guápulo, La Mariscal und Quitumbe by local artists like Apitatán, Bego or Crispo. 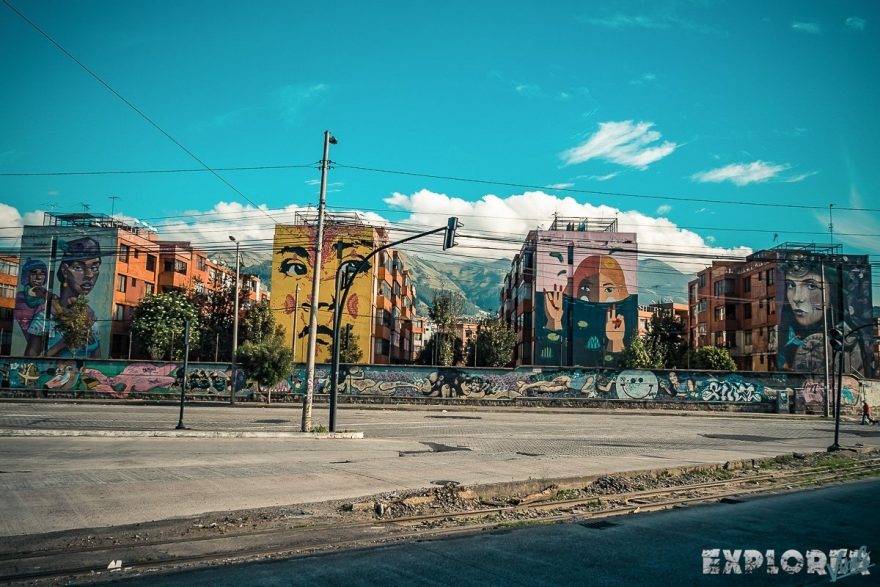 Galapagos. First thought might be Darwin, his finches and huge tortoises. These islands on the other side of the globe (for Europeans ) have to offer impressions of nature you cannot find anywhere else. Though prices have gone extremely up during the past few years to keep mass tourism out of Galapagos and save the exceptional flora and fauna, there are still thousands of tourists every year. Sometimes, you cannot feel relaxed at all during a trip: Human masses, excited, stressed, waiting for a watertaxi at the habour is nothing unusual here. Yet - there is always someone who doesn't give a damn about all this turmoil... 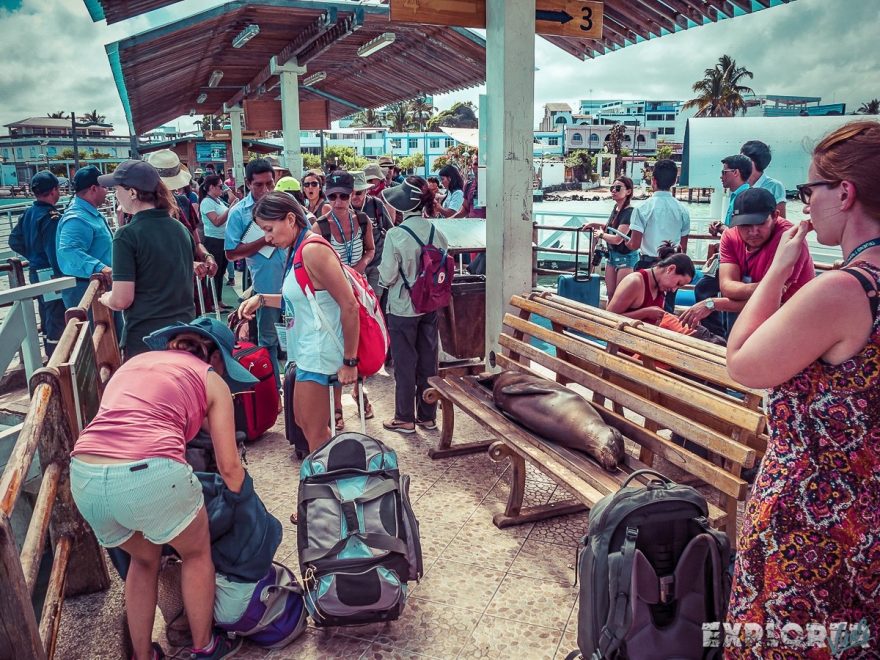 Category "Far". Hard decision - I could have picked any picture I have taken, yet... I chose this one. The classic cliche-photo you take out of an airplane window. Can you connect anything more with the terms "far" and "travel" more than being in a metal bird 10km above sea level? But just some clouds below the airplane wing would have been boring: I was pretty lucky having a clear view on Chimborazo, Ecuador's biggest mountain 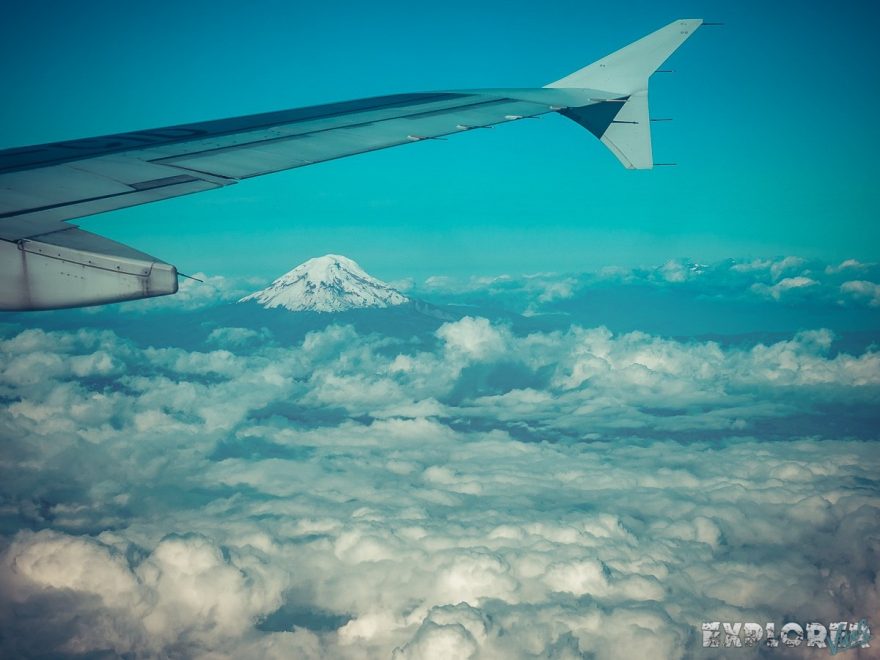 The virgin "La Virgen del Panecillo" on top of the "christmastree"-hill (for some it might look like a bun, for me it looks like a wide christmastree ) in Quito is one of the most famous landmarks of the city. Especially from the ambient illuminated Centro Historico you get a great view on the 45m tall statue - of course while drinking a yummy canelazo. 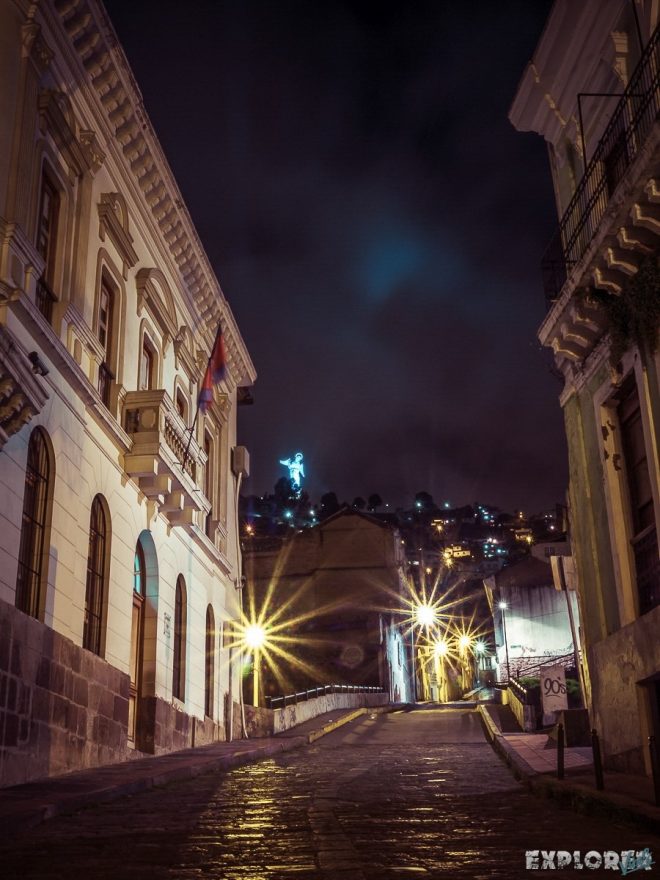 Hmm, my first thought was to post a wreck - but we haven't done any wreck-dive this year at all. It seems all the wrecks you can find in Galapagos are above sea level - Puerto Baquerizo Moreno in San Cristobal is also called "Wreck Bay". Anyways - none of the wrecks would have been as old as the oldest inhabitants of the island... 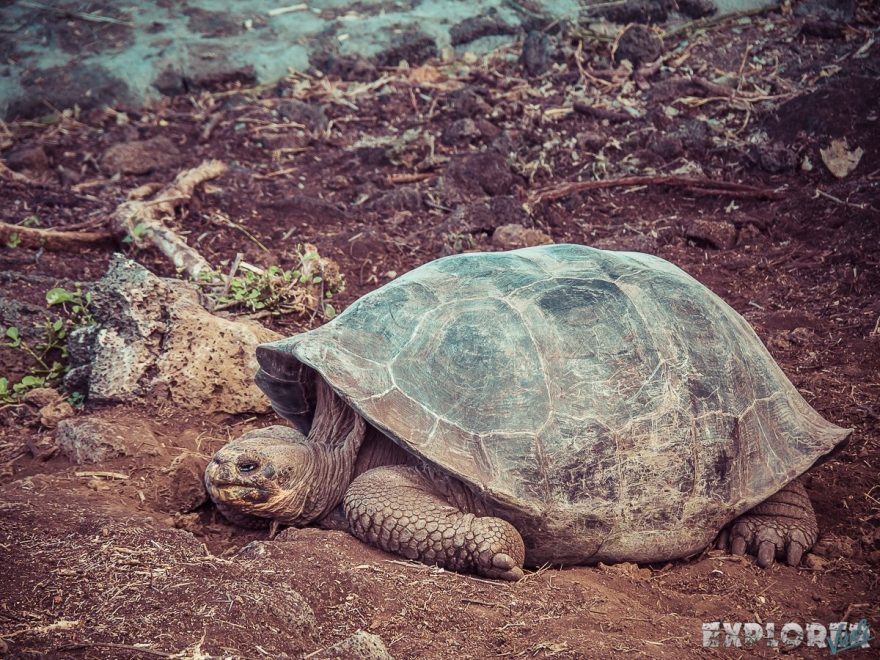 This image would have almost "just" made it to the category "Illuminated", but after having some rather complicated "origins-story" the decision was clear: We had to take a Taxi on San Cristobal (Galapagos) in the middle of the night to get to Playa Loberia right after the airport. No lightpollution at all. Almost no clouds. Just Ena & me - and a clear nightsky with an almost horizontal milkyway. Maybe it wasn't the most common activity, going to a deserted, pitch-black dark beach after midnight to take photos for about an hour but i think Gary and Larry liked it a lot . 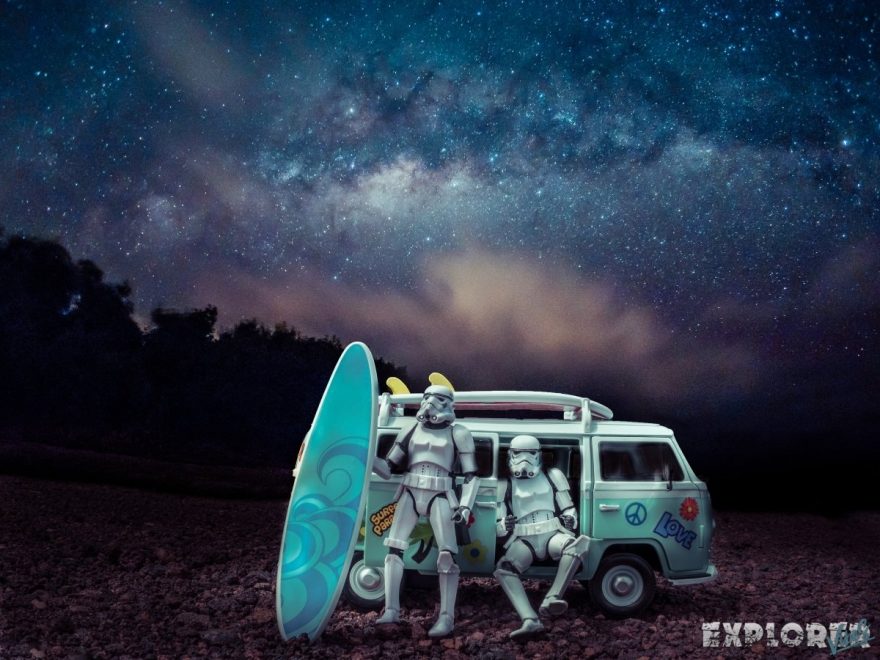 Alright, and here it is, the snapshot I almost posted for the category "Exceptional". Colorful screens seem to attract little kids - especially in Quito there were lots of them mashing on ATM buttons. We wanted to actually withdraw some cash from this ATM, mus had to wait a moment till mama got ahold of this little rugrat 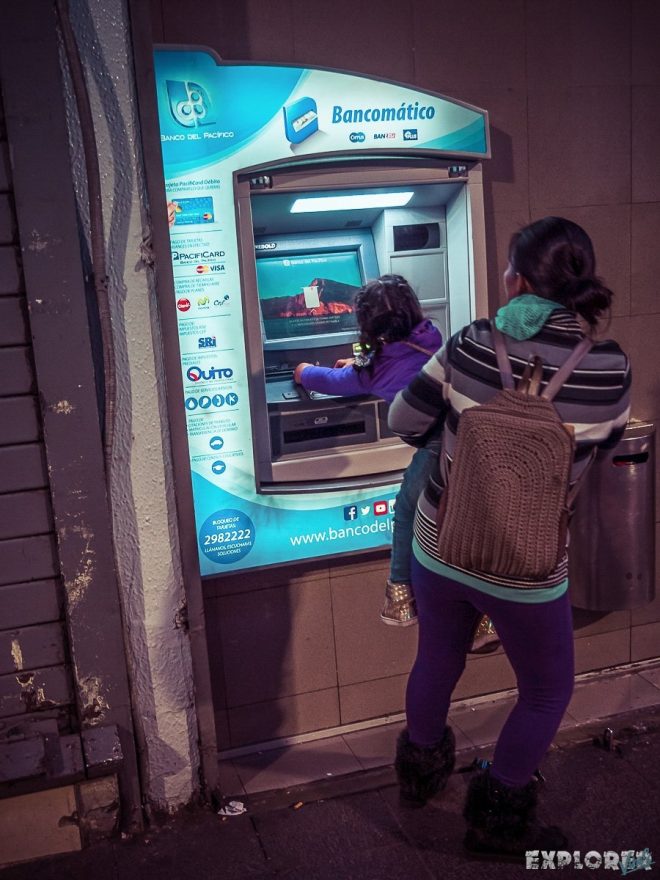 While the bay in Santa Cruz is calle "Academy Bay", the bay of the habour in Puerto Baquerizo Moreno on San Cristobal has a different one: "Wreck Bay". Sounds to me like the practical exercizes for getting a boat license at Santa Cruz are done... "somewhere else"... 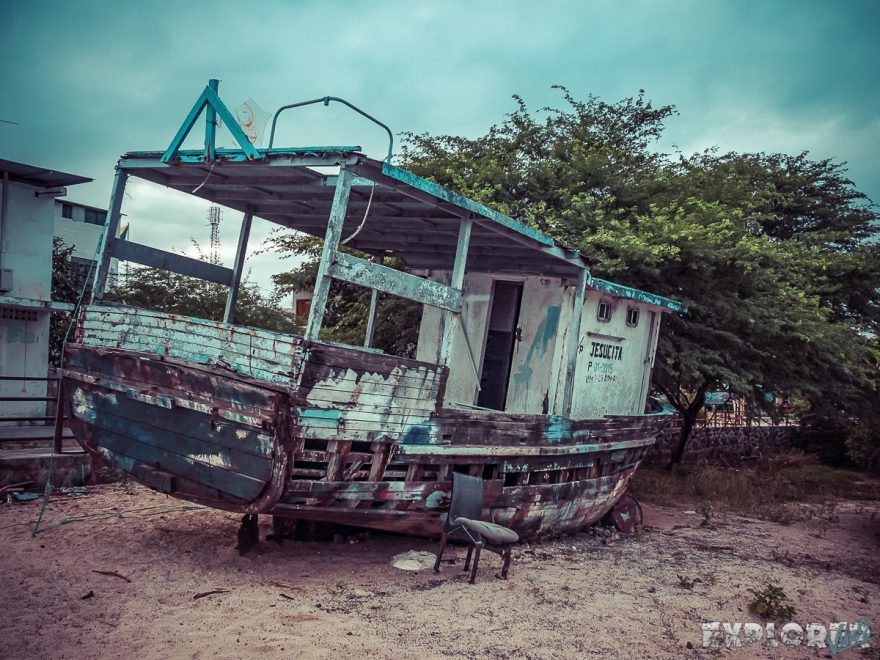 Almost made it to the Category "Far": Almost at the airport... some huge shadow on the ground... 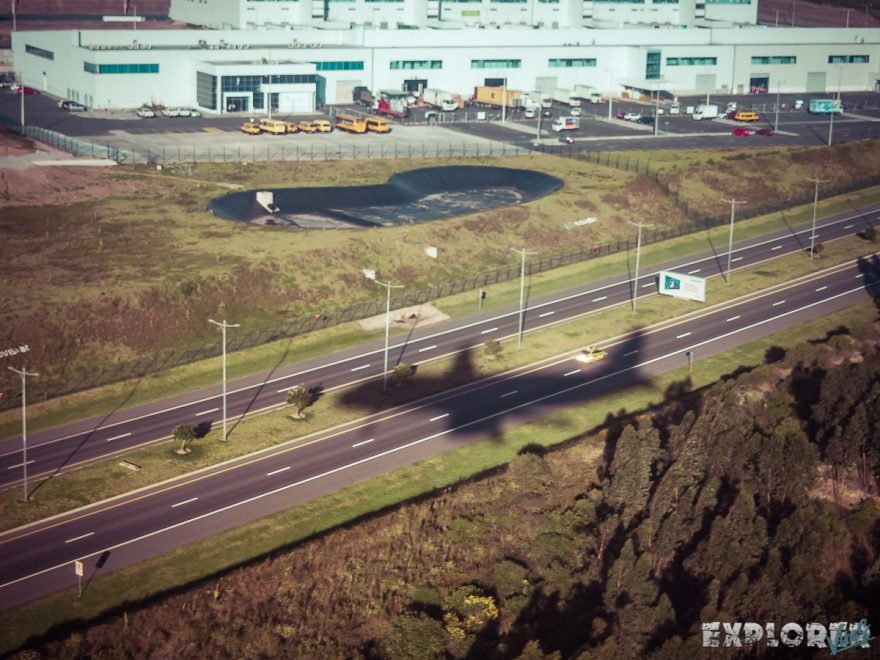 In Baños, right below the "Casa de Arbol" and "worlds highest swing" and next to the hot springs there is this waterfall. Not only does it provide the water for the cold tubs at the hot springs, but its water should also have some healing properties. It is also quite common to baptise people in the tub below. 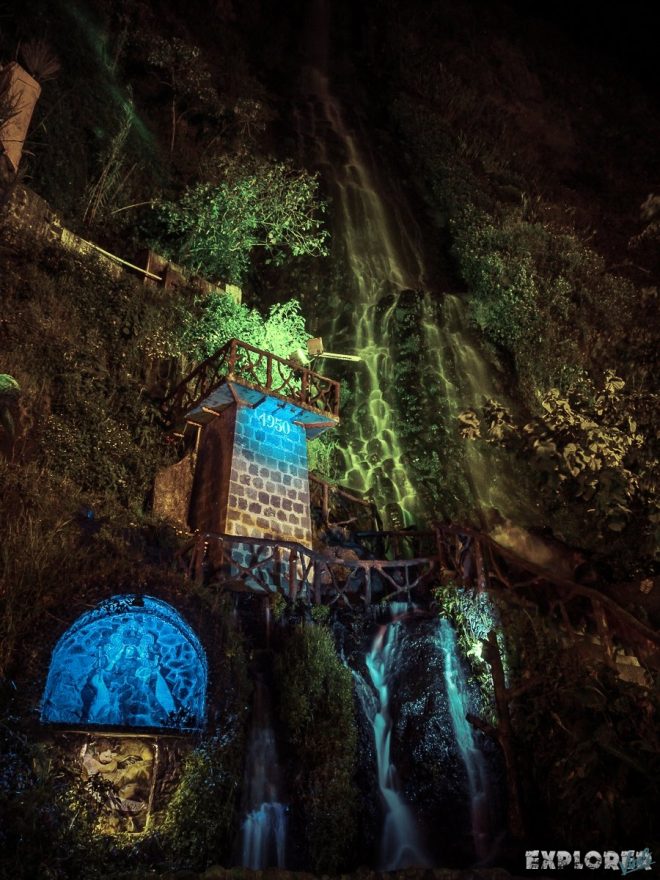 Sunrise, isn't this for photographers like sunset, but you don't have to be lazy (get up early)? Well, almost. Sure, the light is different, but at the lake in the caldera of Quilotoa the sunrise is by far easier to take a photo of than the sunset. Having to walk 3km in the dark after sunset to the village? Naaaaah 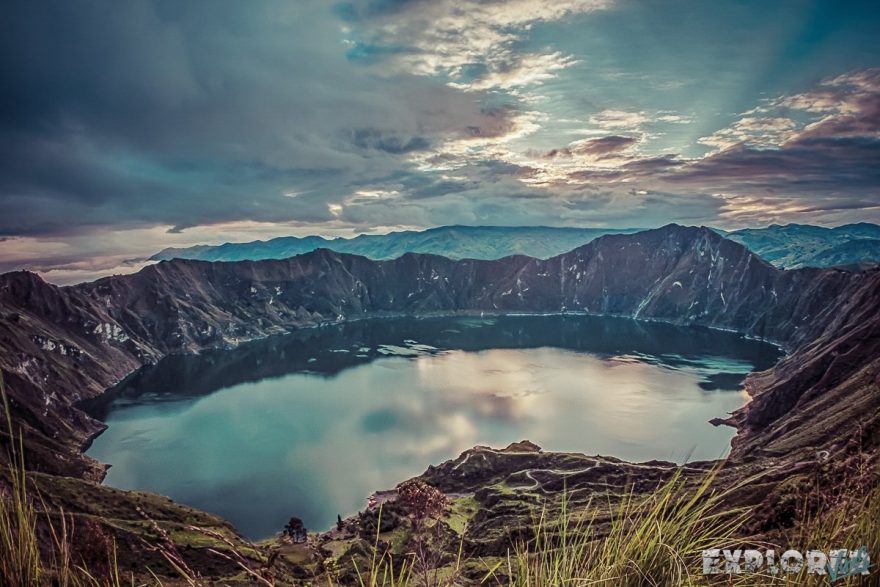 Being shy? Galapagos' animals don't seem to know this word. Like Tomás de Berlanga already wrote about the Galapagos Islands 450 years ago: "[...] there were many sea lions, turtles, iguanas, tortoises and many birds like those from spain, but too silly that they didn't know how to flee [...]". Nope - most of the animals here dont seem to be interested in humans at all - that is, if they don't want to play... . 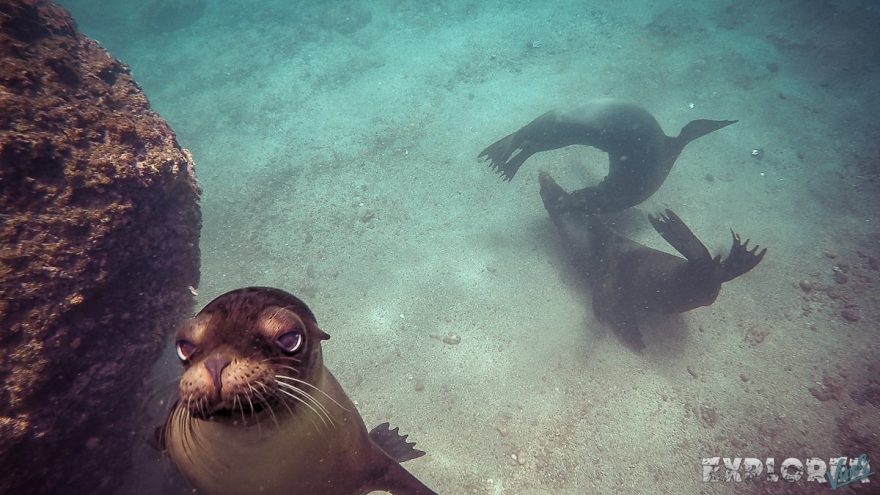 Want some more pictures? Have a look at the “Encore”-Tab up there

Check out one of those Photoreview-Entries:

Want even more pictures? Lots of other travelbloggers take part in this fotoreview. Check out Michael’s page for more ! 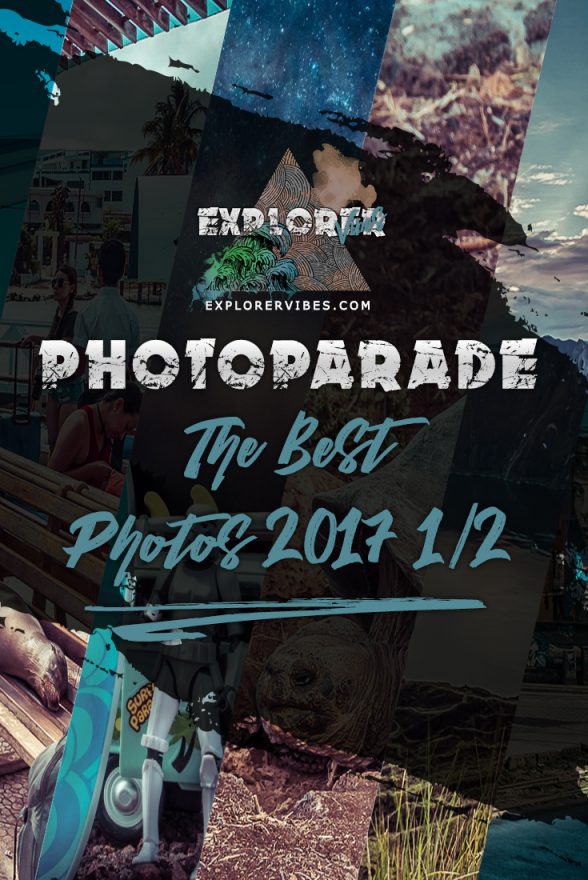 Greetings! I really like your pictures. The Chimborazo taken from the airplane is amazing! Nice shot!
Thank for taking part!

Thanks Michael I was really lucky that day. Including Cotopaxi I had clear view on 3 mountains