I wake up just a few minutes before 6 am at sunrise, so why not watch it? Unfortunately, the numerous trees on the yard prevent a clear view. Yet, I get to see some sheep that kinda took a wrong turn and walked off into the bungalow-area. As I walk to the pool I get to see 2 large iguanas sunbathing there. Then, I notice a tarantula that has fallen into the water. Though the animal seems to be quite soaked (and probably can no longer shoot its stinging hairs) it certainly is also quite irritated – no way I’ll get the spider out there with my hand . I head back to the bungalow and unintentionally wake up Ena while looking for my GoPro stick I usually use while scuba diving. 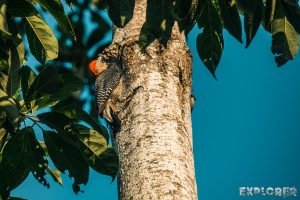 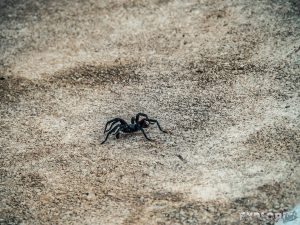 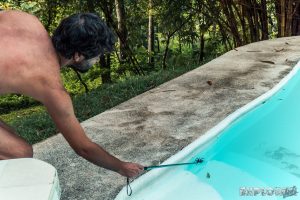 Seems that apart of attaching your camera to it you can also use it to rescue spiders out of pools. Still kinda dazed, it crawls into the bushes. Since we still feel a little sleepy, we decide to return to bed. Yet, the animals in this area seem to be wide awake now: A little later, we hear some howler monkey that starts the Ruben-Goldberg-machine of animal noises: A few dogs start barking, roosters make also some noise and some cows and a donkey react to that, the birds at the courtyard panic – everything somehow starts escalating… Until everyone finally calms down. We sure are not that far from the jungle it seems. 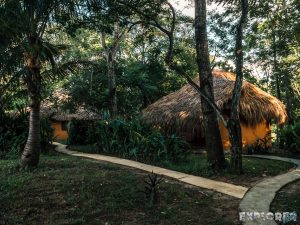 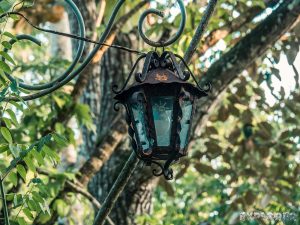 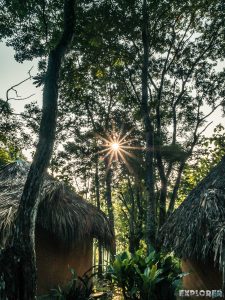 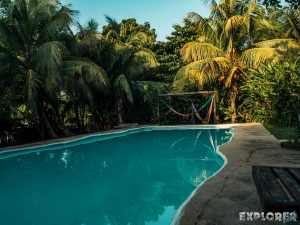 Eventually, we get up and have a huge breakfast later. We have a short swim in the pool afterwards before we get picked up by a minibus at 12 o’clock. Our plan for today is to visit the two waterfalls Misol Ha and Agua Azul and then switch to a larger bus to get to San Cristobal de las Casas. Our backpacks get strapped to the top of the bus with a rope, along with a plastic bag I stuffed my laundry into. All the folks on the bus seem to just want to visit the two waterfalls and then return to Palenque. The road to Misol Ha is quite terrible: Winding roads with that kind of speed bumps which are typical here in Mexico. They really want to ride the same route back again ? The minibus rocks up and down wildly. Every now and then I look through the rear window to see if it is raining dirty laundry. “This would solve your laundry problem”, grins Verena. She also has some of her laundry in the bag, I remind her . 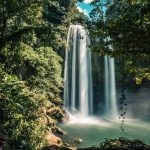 After some not-so-comfortable ride, we finally arrive at the waterfall. Unfortunately, we just have about 45 minutes before we have to leave. After such a long journey that seems quite short for us. The water looks extremely refreshing, yet we don’t have the time for a swim. We take the path behind the waterfall till we reach the big boulders at the end (shouldn’t have put on flip-flops on by the way – it is quite slippery here). 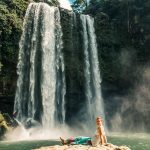 There is plenty of “human traffic jam” on the narrow ridge by all the folks carrying selfie sticks. On the way back, we pass a mother who argues with her two juniors. This sounds the same in every language . My Spanish is indeed a disaster, but that sounded like “You keep running out of sight and get me worried”. Yeah, it’s more touristy and hectic than I imagined here. Despite the spray water it somehow starts to feel stuffy and warm… Now I would really like to have a jump in the natural basin, but the bus is already waiting. Sometimes these combos of transfer and sightseeing are way too chaotic.

Agua Azul, the second, larger waterfall is just about 50 km from Misol Ha. Yet, the way feels much longer because of the winding roads. The moment we arrive we get instantly besieged by countless restaurant employees and souvenir stand folks. All the paths next to the waterfalls are crowded with all kind of different booths. But just a few meters down the road we don’t get bothered anymore and it feels more relaxed. Since the area here is quite larger than the one at Misol Ha we have some more time at our hands. Going upstream, there are some nice pools you can have a swim or simply cool off your feet. 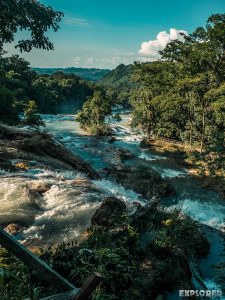 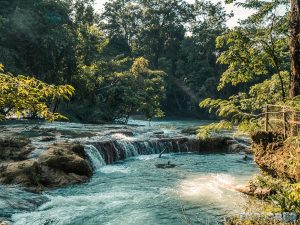 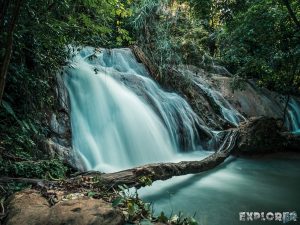 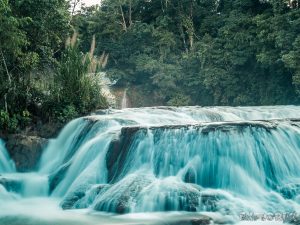 Nevertheless, we goof off a little too much and on our way back to the bus we start to get a bit hungry – to bad we do not have much time left. We order some quesadillas in a small restaurant next to the parking lot. “Will they be finished until 15:15?”. “Sure, of course!”, the waiter’s response. But we still need some time to actually eat them. We gulp our food and run to the bus, I really hate these kinds of “stopwatch tours”. 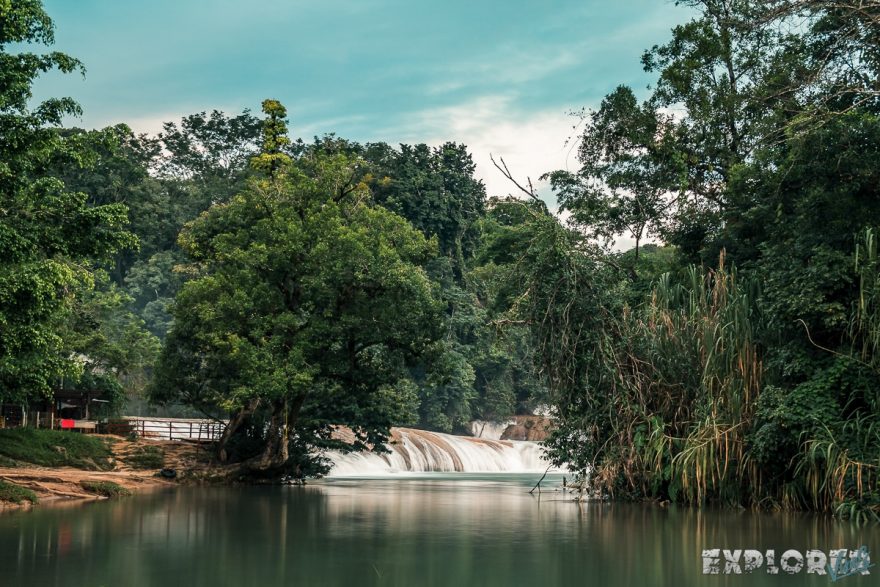 On our way back we can already see some bad storm clouds approaching us. We stop at a cottage near the road behind another minibus already waiting there and our driver gets our stuff from the roof – I thought we would switch to a coach for our ongoing trip to San Cristobal de las Casas? Ok, we get off – and back on after a little chat with our driver. The minibus in front of us belongs to the same company, but has some free space and can store our luggage in its interior – our backpacks won’t get wet this way – those guys are quick thinkers ! We almost forgot about our backpacks on the roof. 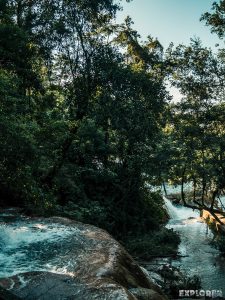 A few minutes later it’s raining cats and dogs. Some fast reaction by the drivers! We eventually stop at the side of the road at a small supermarket. In the small bus-tv Ricky Martin, Jennifer Lopez and Enrique Inglesias are singing alternately in music videos, accompanied by the sound of the rain on the windows. We keep waiting for several minutes. A bus stops. But not the one to San Cristobal de las Casas – we went out with backpacks in the rain for nothing . Meanwhile, we started waiting in the supermarket. Soggy and without electricity – thanks to a lightning strike in the roof of the small building. The Latino pop in the bus was somehow quite entertaining – standing here in the dark is quite monotonous. An eternity later, the bus finally arrives. We get into a somewhat larger minibus and are off to our next destination. I got some huge respect for our driver: The minibus rocks up and down while going up and down winding roads with those kinds of speed bumps which are typical here in Mexico. I’ll be grateful when we arrive. I really hope that the trip back won’t be the same way.

We arrive at the ADO station and take a taxi to “Puerta Vieja”, a quite popular hostel. The taxi driver does not have to get us that far – we drive through a street with many bars and restaurants. And then we are already there. Seems it will get louder this night with all the bars next door. We check in – a huge room with some large, massive doors facing the courtyard. 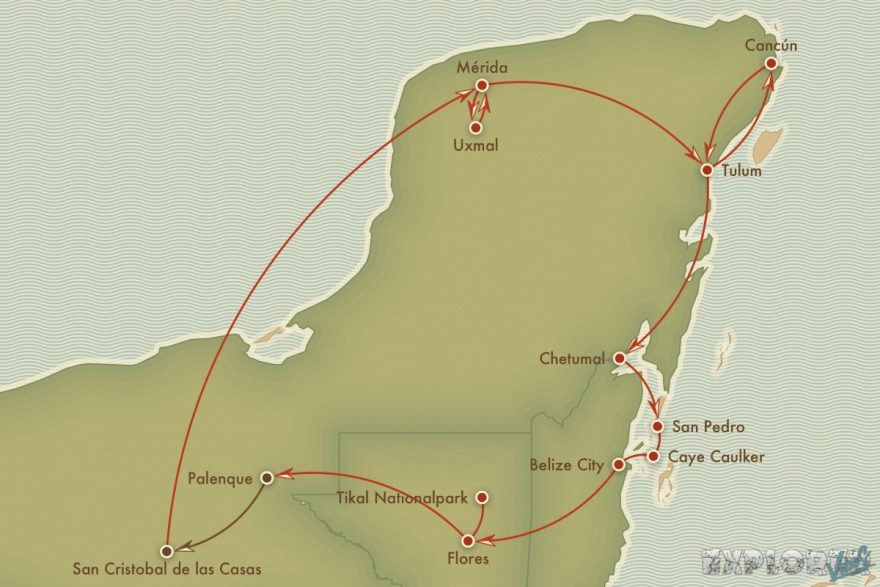 After throwing our stuff on the bed we head to the garden where a party seems to be going on. Just as we arrive at the bar, we get offered a “Welcome-Tequila-Shot”. Ok… we were supposed to eat something first but… never mind that… I order a beer afterwards, but we each get a Sex on the Beach cocktail of the house first – and another tequila shot too. One of the guys who is volunteering here goes around with a with a bottle of tequila in his hands pouring in free shots… Everything turns into a merry drinking session. Two Sex on the Beach cocktails and another tequila shot later, we prefer to go to bed. On empty stomach you sure feel the side-effects of all the alcohol… and we aren’t in our twenties anymore . But volunteering in Mexico sure seems to be fun. 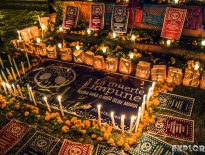 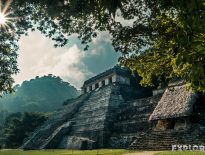