Kayaking on the Quilotoa Lake

This post is part of the summary-article 3-Week Itinerary Ecuador (including Galapagos) on a Budget . You can either use the links in the summary to get detailed information about each place in the itinerary, or the floating bar at the bottom of the page to navigate through each day.

We get up quite early and pay for the night in the hostel (32 USD) before we lock our backpacks in the storage room in agreement with Tiana. We put a few valuables in one of the lockers – as usual we have enough padlocks with us. The next two days we will manage with our daypacks – where we actually for the most part just stuffed with snacks and electrical stuff .

Before we head towards the bus station, we have to overcome another hurdle: Finding an ATM we can get money at. We almost spend an hour walking through the city and have already tried 5 different machines, each with 3 different creditcards, until a bank employee gives us the suggestion to visit the “Parque Vicente Leon”. ATMs from different banks are lined up here – and we are quite lucky: It clatters, rattles and the banknotes appear out of the slot.

Will we reach the bus station in time before the early bus to Quilotoa departs? We get ourselves a taxi ride to the terminal and are in luck: Although we are officially too late for the 8 o’clock bus, the bus ride will not start until 8:30 because there are still too few passengers present. Excellent . 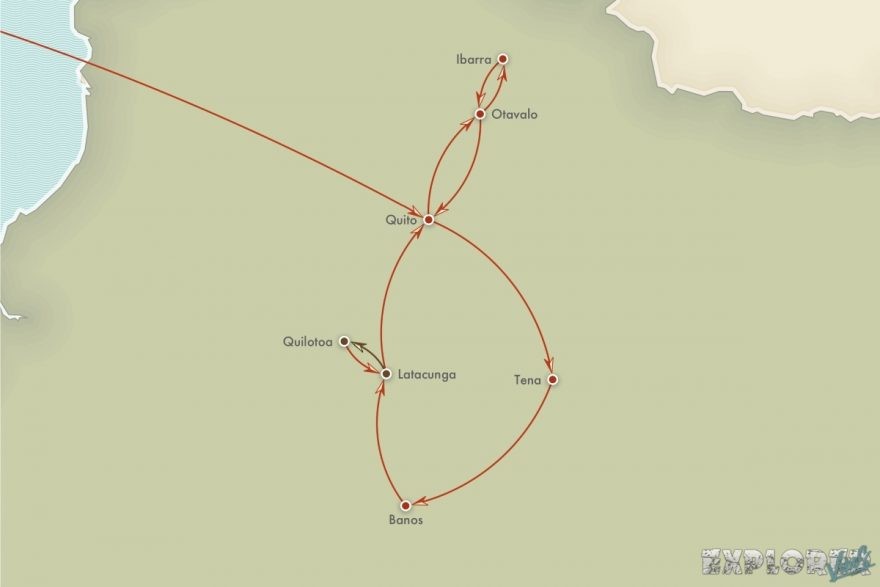 There are quite a lot of free seats available during our trip, and I really can’t tell from which side the view is better, more breathtaking, more beautiful… We drive past Pujili and the landscape gets hilly – some clouds create a play of colours on the pastureland…

Passing Tigua, we reach Zumbahua – As it is Sunday, there is a huge market here. Unfortunately we can’t get off the bus spontaneously, because it’s not sure when the next bus will go to Quilotoa – also… we have planned to visit Otavalo anyhow, where the weekend market is supposed to be even bigger .

The small village at the edge of the Quilotoa crater consists of about 40 houses – so finding our lodge is quite easy, as it is located quite in the center. By the way: “Runa Wasi” means “house of man” and we were welcomed very heartily by Olympia, the daughter of the owner (with a hot Canelazo – you really notice the altitude difference here. It’s really chilly after all.). After a little chat, we bring our stuff to our room, which has a small fireplace right in front of the bed – cozy… It will definitely get cold tonight . 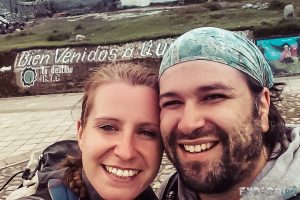 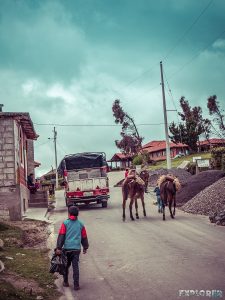 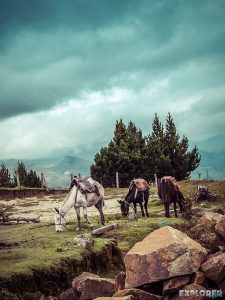 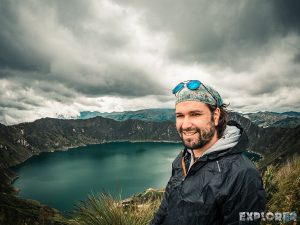 To make the most of the day, we should get to the crater early – it takes quite a while to get down. So we put on our hoodies and a rain jacket on top – so the warmth stays inside – as a jacket replacement. The incredible view of the crater lake is already stunning right at the edge of the crater. We decide to walk down and go kayaking instead of hiking around the crater or renting bicycles for a round trip. The way down is quite bumpy, but thanks to hiking boots and rather pleasant weather a descent is not a problem – the somewhat exhausting part seems to be the altitude difference (3914m). Along the way we spot some alpacas (soooooooo fluffy!) and some horses. Apparently, you can get up here again on horses… 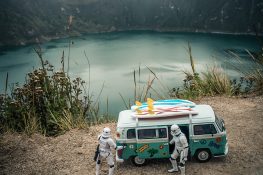 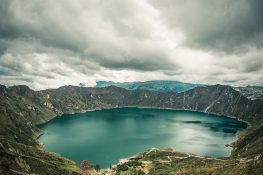 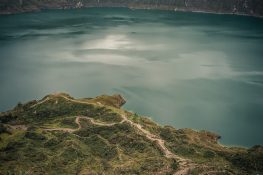 In fact, the thought of riding up on horses afterwards seems more pleasant to us as we arrive at the very bottom. In the beginning, it is quite easy to walk at this altitude – but the physical exertion becomes noticeable after all. 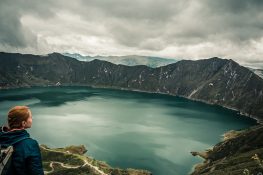 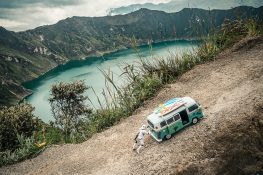 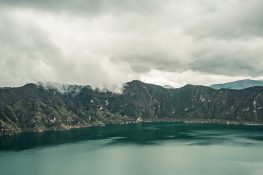 There is a kayak rental on the lake shore and even people camping directly in the crater – an interesting possibility, but as it was chilly to sleep in the rainforest of Tena, this certainly isn’t something I am looking for…

We take a short break and stretch out on the beach – some other hikers seem to have had the same thought as well – have a rest at first, then we can go kayaking. Only 5 minutes or so later I appear to have made 2 new furry friends: 2 young dogs were romping around here, which now snuggled up to us and looking for some affection. You are probably also cold, mhh? 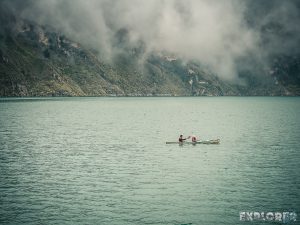 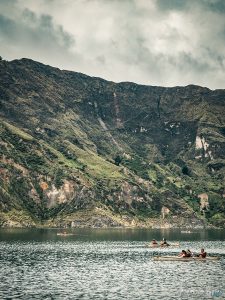 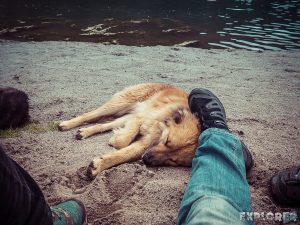 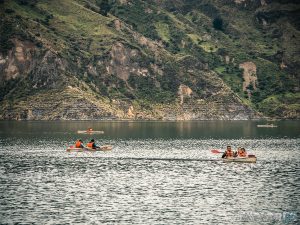 Several minutes later we visit the kayak rental to spend half an hour exploring the lake. Not a minute too early, since there are already some wafts of mist on the opposite side of the crater. Everything appears to be somehow unreal if you see the fog dancing towards you above the water… It seems that we and some other visitors the last ones who went out to the lake today – it is already starting to get a bit dark. 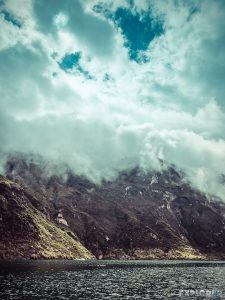 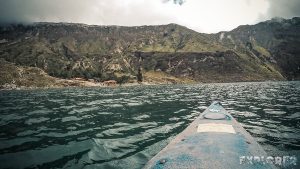 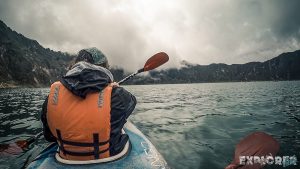 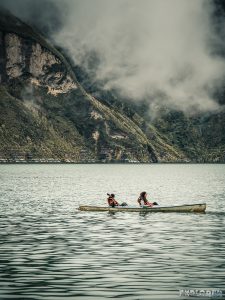 Back at the shore, we talk to one of the many horse owners who are waiting for customers: They too seem to want to go up soon. For a small fee, we are allowed to ride upwards on two horses. One glance at the watch: It’s just after 16:00 – and the crater is slowly filling with fog. Perfect timing . The two mounts seem to know exactly what to do: I don’t actually have to direct my horse, and I seem to be riding the “lead horse”, since both Verena’s and the owner’s horse follow him up very well-behaved. Well, almost. Verena’s mount seems to be nevertheless somewhat younger and faster like mine, however, my old fart is also quite stubborn and blocks all overtaking attempts . 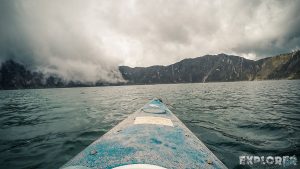 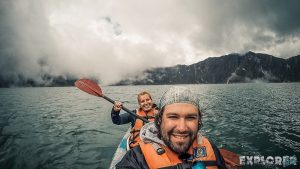 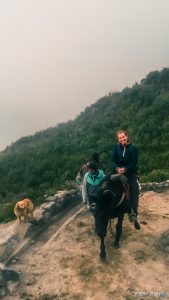 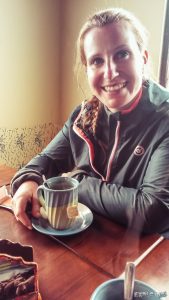 Arriving at the top we look down on a layer of fog – that happened quickly… The temperature also seems to drop rapidly – so we spontaneously decide to visit the very first restaurant and warm up. Here we both order a warm coca tea. Perfect to warm up and it should be helpful to get along with the difference in altitude here (I don’t notice the latter, but it tastes good ). While we are sitting at our table and drinking tea, the owner of the restaurant approaches us. Due to the similarity of the German language to Dutch, he assumed that we could help translate for a Dutch guest, who wanted to rent a room in the guesthouse, but his Spanish and the English skills of the owner are too bad to communicate. Apparently, you can rent a room almost everywhere around here… 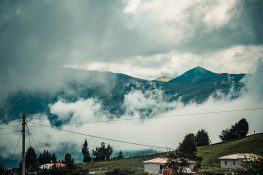 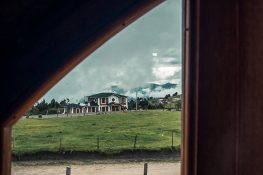 Back at the hotel we again encounter Olympia, who informs us that there will be dinner at 18:00. There is still some time and we are a little tired, so we lie down for a moment before going down to the dining room.

It is festively decorated downstairs, so we are a bit confused at first. We join two Quechua women, who probably also belong to Olympia’s family. Shortly, another couple comes down the stairs, who are also visitors here (from Belgium and Italy – so we are quite the multi-cultural guests ). We chat with the two women and it turns out that we are actually invited to the birthday party of Olympia’s grandpa. We thank Olympia’s mother for the invitation, who leaves the kitchen for a brief moment – several people seem to be busy in the kitchen – I am really curious how a birthday is celebrated in the Quechua way…

One by one all relatives turn up – we help to move the tables together and are asked to take a seat. Our host, Olympia’s mother, tells us that today is her father’s 85th birthday… “The 82nd!” corrects Olympia – both look at each other… and agree on “Muchos años”, while the birthday boy’s wife bursts out with laughter and the group joins in. 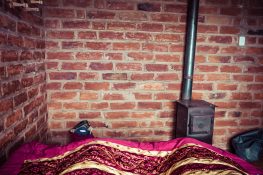 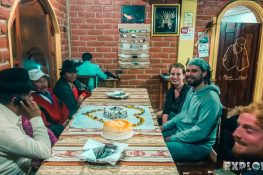 There is sparkling wine as an entry and we drink to the health of the grandfather after we share something that we are grateful for. Interestingly, the younger family members have to translate here, even though we speak Spanish: The oldest generation at the table does indeed only speak Quechua – a language which I think sounds very much like a Central Asian one.

All in all, the celebration rather surprises me with the fact that… it does not surprise me. It’s a nice cozy get-together with lots of delicious food and lots ( ! ) of cakes, where people talk and joke a lot.

The evening is quite long, and before we go to bed, we turn on the stove in the room – a bitterly cold wind blows outside. We didn’t even notice how cold it got outdoors while we were in the big hall downstairs…

The Market of Otavalo

Ibarra and the Waterfall Peguche

Hiking at the Laguna Cuicocha

The lava tunnel of Las Grietas

Scuba Diving at the Gordon Rocks

Snorkeling with sealions at Muelle Tijeretas

From Isabella to San Cristobal

The sealions of Concha de Perla

Wow- what an adventure! It sounds like quite a hike to get down to the lake but looks totally worth every step!!

I’ve always wanted to try kayaking, and I can say this one is worth it experience, based on the pictures, the view you get to see while doing it. Ad the wine after the kayaking is a perfect way to end the day.

Kayaking on the Quilotoa Lake 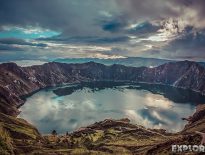 Ecuador From Quilotoa to Quito 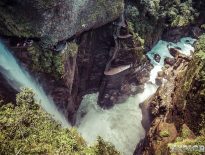