At the Equator – our first day in Ecuador

This post is part of the summary-article 3-Week Itinerary Ecuador (including Galapagos) on a Budget . You can either use the links in the summary to get detailed information about each place in the itinerary, or the floating bar at the bottom of the page to navigate through each day. 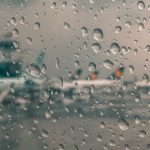 Wow. My first positive explosives test. “I didn’t do anything” I say and make puppy eyes – “That’s what they all say” the 2 called policemen have to grin.

“Those things are calibrated so sensitively”, says the security man, “that they recognize a sugar cube in 1L water”. Yes, they generally react to glycerine, including hand cream, or even silicone oil for rubber seals… After this short stop we make it into the plane without any further incidents, but are now 30 minutes late because two guests have not arrived yet but have already checked in their luggage.

I hope we get our luggage when we have our transit in Panama… the transfer time is not that long any more.

During the flight a stewardess taps me on my shoulder and asks me if I am familiar with football… “The round thing needs to go in the rectangular thing”. As it seems, Kurányi is also flying with us and the crew doesn’t want to embarrass themselves – “Which team is he currently playing for?” I have absolutely no idea. *

There are many Germans hanging around here. Was it like this the last time as well?

Verena makes use of the time and looks for a shop that sells Peanut butter M&M’s, but we don’t have much time – totally exhausted we board the Copa Airlines plane to Quito.

A mid-20’s is sitting next to us in the plane with whom we chat a bit. This is his first flight. It’s amazing to have such a long first flight… He plans to visit his girlfriend who is already 3 months in Ecuador. Unfortunately during a bus ride she had quite a lot of luggage stolen (a “helpful” man assisted her to lift the hand luggage onto the carrier). While she looked away for a brief second he then immediately took it down and ran away). Really annoying as her camera was also in there. Now she is getting a replacement from Germany together with her boyfriend .