“The pristine beaches of Kuna Yala” or “Hallo Friday”

I wake up. It’s quite windy… and dark. Actually absolute darkness. Somehow the temperature has gone down – where I have previously slept without any sheets, it now feels a little chilly, having wind blowing through the gaps of the hut. The noise of the waves and the palm leaf rustleing make everything feel kinda surreal. It’s like a constant “white noise” in total darkness. Trippy. I actually have to go to the bathroom, but the toilets are on the other side of the island and about every 10min you can hear a *Clunk*. Coconut or palm leaf, quite a lot is falling down here at night thanks to the wind. I take with my flashlight and get out of the hut… Just away from the cabins somewhere near the beach. I definitely won’t walk all the way between the palms to the toilets while coconuts keep falling down this often .

Then, I get back to bed and wake up shortly after sunrise, still snoozing on a little. As we hear the sound of the conch, we get up for breakfast. As we are almost at the big cabin, another palm leaf falls down and lands approx. 5-6m from our position. Some Blackbirds land on it and look kinda confused. I’m now starting to avoid walking directly under coconuts. 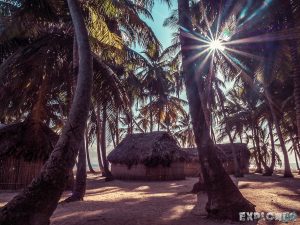 Breakfast? Continetal. Coffee, a hot dog bun with cheese. I am more interested in typical Kuna food instead. Why are all the meals adapted to the guests? Come on guys, this is Latin America… After finishing breakfast, we get picked up by the guys from yesterday’s “party boat”. I’m looking forward to see the island we are heading to. We make a short stop on another island to get some stuff unloaded and some other supplies loaded into the boat (generally quite a lot gets combined here – lots of errands have to be done at the same time as we get driven around. We are quite a few kilometers away from the mainland and getting all the fuel here for the boats is surely expensive). When asked where actually “Starfish Island” is we heard about, we get told that the sandbank we saw yesterday is what remains of this island. The starfish have disappeared there thanks to the numerous tourists. The beach of the island on which we have just anchored for the errands, could be renamed to Starfish Beach now, since lots of them seem to have gathered here. Just as we are about to leave, the owner of an anchored catamaran nearby rushes in from behind his dinghy, pulls a sharp left and splashes everyone in the boat. Although the two Kunas in the boat are grinning and bearing it, the rest of us do not think this was particularly funny. “The fuck, asshole?!”.

Well, we are off to the next island for some snorkeling. 12 palm trees and a small hut – thats all there is on this one. Total Crusoe atmosphere. Kinda fits, since today it’s Friday . We are 7: The couple we picked up at the travel agency yesterday (from Sweden), the 2 girls from the Hilton and a young solo traveler (all three are German) – If it isn’t yet clear by now: Panama is a popular destination among Germans. We are free to stroll around, relax and snorkel for about 2h. Then we will be picked up again for some barbeque on Chichime. Alright. 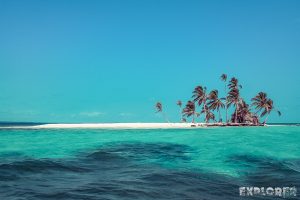 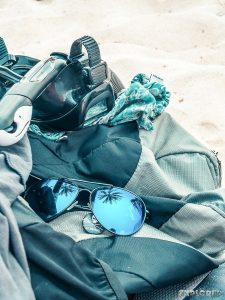 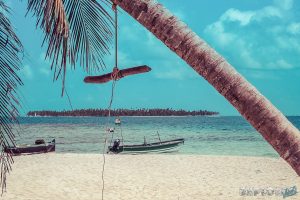 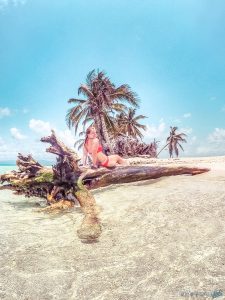 We swim, snorkel, circle the island (which also got some nice small reef). The Swedish couple seems to have been quite some days in Panama: Despite their typical brighter complexion they both got quite some tan. The 2 German girls are now also lying on their towels sunbathing – though… in the blazing sun? (Lobsters are incidentally not red by nature, they take this tone only when getting cooked). Yesterday’s initial enthusiasm fades slowly than after waiting more than 4h for our boat to appear. 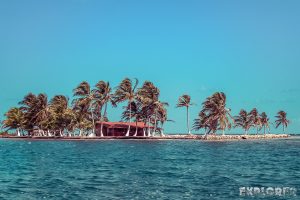 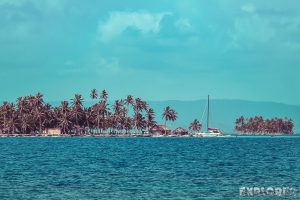 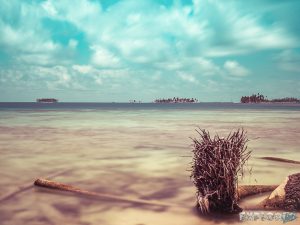 Have they forgotten us? Although we see quite some boats getting to this island, loading and unloading suppies, none of them is ours. I ask the folks who own the hut if they by chance know the guys who dropped us off here, so we could just call them on the phone. Doesn’t seem that way. Anyhow, you can buy beverages here – so we won’t die of thirst, heh. But despite lying in the shade, it starts getting uncomfortable slowly. I already feel the skin of my calves hurting – which were lying in the sun. Just right before I decided to ask the next arriving boat to get us back to Aroma, our boat arrives. We were staying for more than 5h here. I long now for something ice cold to drink and something to eat. 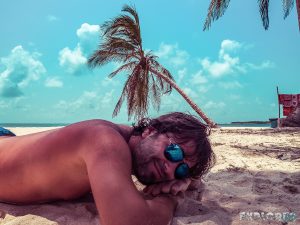 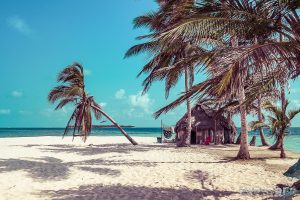 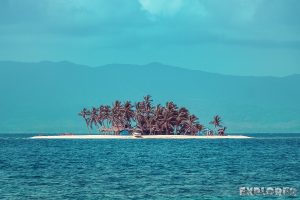 We have some Barbeque chicken, salad and fruit in Chichime. Hunger! The boatman that picked us up just mentioned after eating, that we had another 20 minutes before he’d take us back to Aroma. Hmm, oookay. I’ll just use this little time to have a look at the other side of the island, where some boats are moored. Just as I’m about to go off I get an “Ey, amigo! Diez minutos!!!” called after. Yes massa, sure massa, I picked dah cotton massa! May I get mah cornbread now massa?! Chill, dude. Okay, I know… I’m a guest here and all, but having forgotten us on an island with barely any shade sizzling in the sun for 3 hours and then spearing all-inclusive-vacation tour atmosphere with tapping on your watch? Not cool . Somehow I guess a sailing tour would have been the best choice… renting a catamaran with some other folks or something. Sure, this would be more expensive and lots of more organizing would be needed but.. well.. Also, you won’t be able to talk much to the locals here, but we do not have the chance eighter to do so – everytime we tried looking for some dialogue, responses were quite laconic. 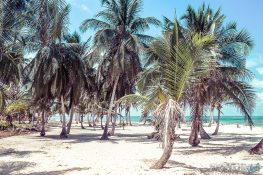 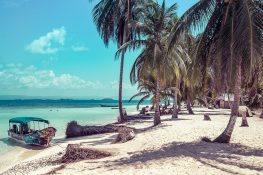 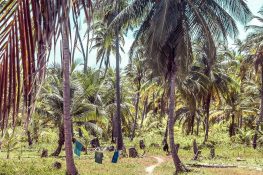 The party boat takes us back to Aroma. As soon as we get to our cabin, we see a few thieves getting out of the door with some loot: 3 Blackbirds with Platanos in their beak are on the run. They have slipped under the door and were inside. We enter the room and I get the feeling that these critters aren’t as stupid as I initially thought – yet quite greedy. The already opened bag of Maduras got plundered and some remains can still be found on the sandy floor. They even managed to open the sealed Platano bag. There are footprints of the robbers throughout the area . We decide to leave the crimescene and take a shower before we take a nap. Our skin is literally screaming for aloevera. For me it is primarily the back and the knees (Having a sunburn on your calves is terrible – if you try to squat it makes your skin feel like being on fire), Ena was already busy to keep her sunburn mimimal during the whole trip (with limited success though ). 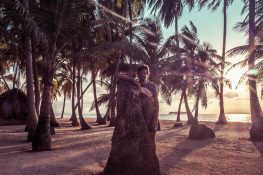 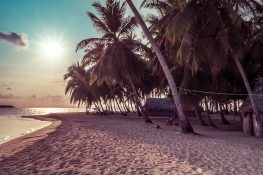 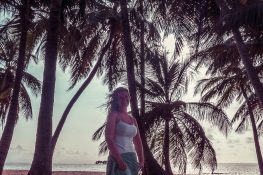 For dinner there is Platanos with rice and vegetables. Meanwhile, we are talking with 2 girls, which are housed in a hostel in the Balboa district of Panama City. This one is quite new, but nice and quite unknown. So they have a whole dorm for 6 for themselves. They’ll leave tomorrow afternoon with us. The 2 girls from the Hilton will also depart tomorrow, yet already in the morning. They were in Cuba first and continied their journey to Panama. The mother of one of the girls still has relatives in a small village between Trinidad and Varadero so they combined their trip there with visiting them. Wow, I can still remember that the villages between Santa Clara and Varadero were definitely not among the richest, so… how come they both live in Hamburg-Altona? As we talk about our last accommodation in Panama City, they tell us that they want to indulge themselves for the last day: A stay at the Hard Rock Hotel. Hmm, i always thought the Hilton was more expensive… But yeah, I think we’ll also spend a little more for our last-day stay. We’ll see. Some newcomers are also at our table: Hubert is a Swedish guy who booked a day tour and stays for one night. He is on some sort of “paid holidays”, since his employer is planning to establish some sort of eco-bungalow colony in San Blas (Small luxury apartments with photovoltaics, water filtration, etc. in cooperation with the Kunas) and he is here to get an impression of the islands.

I don’t know – I have now mixed feelings regarding San Blas, since after these two days it feels like a mixture between a holiday camp and an all-inclusive resort. Yes, it is paradisiacal here… the landscape looks like the typical ones you see in brochures and all – but… this timetable organization ruins a lot. Also: Luxury estates for tourists here? Definitely won’t make things better. Maybe the volunteering girls make some more interesting experience… 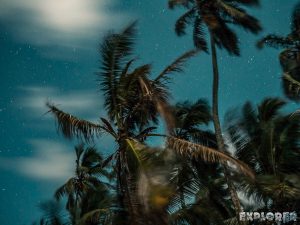 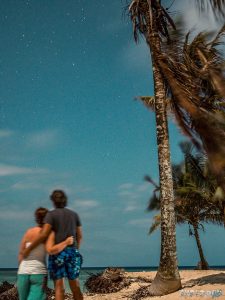 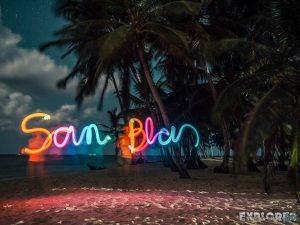 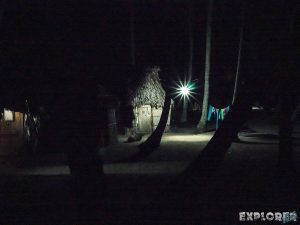 Paradise islands: Drop everything and go to San...

Get your Caribbean vibes at Bocas del Toro

From Santa Catalina to Boquete: First Beach, then...

Panama looks like a cool place to visit. I definitely would want to try a hostel or a non- touristy place to stay. It sounds like you can meet lot of people when you travel. Thanks for sharing!

“The pristine beaches of Kuna Yala” or “Hallo Friday” 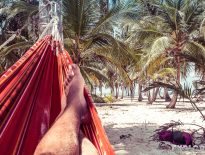 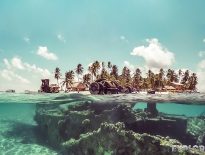 Panama Paradise islands: Drop everything and go to San Bl…
1