I wake up just after sunrise. Though the beds here are quite basic you can sleep very well by the constant white noise. It doesn’t take long befor I hear the conch-bugle call. Breakfast is ready. Ena wants to remain in bed though, stone beats scissors, scissors beats paper, sleeping beats hunger – besides, we still have lots of gluten-free supplies left. After breakfast, there is an option for a ride to another island for snorkeling, but everyone who has been with us on the small island the handful of palms yesterday doesn’t really feel like it. We rather want to spent the remaining time here and relax. It seems though that we have to get our stuff out of the cabin since the next guests are already arriving (wasn’t check-out at 16:00?). So we pack our bags and store everything into a big dorm hut. 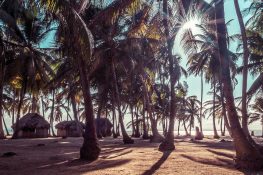 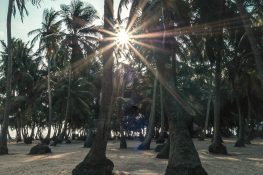 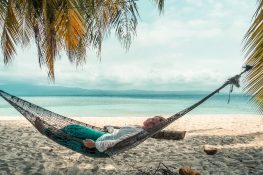 Again with all this tapping on the imaginary watch… This really starts pissing me off now . Well, it looks like everyone that was left for 5h on the island yesterday don’t have the slightest desire for another trip. We lie in the hammocks and I chat a bit with a newly arrived French woman, which is travelling with her teenage son. She had booked a custom tour, from what she is telling me, the procedure is quite similar to ours. Somehow it doesn’t feel that special anymore. As the conversation continues she tells me that she emigrated to the States… and the experiences she had while having preliminary election. Yes, the conversation drifts off a little into a political direction, but remains pleasant . I finally get a understandable explanation of the electoral system in the States (perhaps because she could explain it from a different perspective). A boat arrives and drops off some new guests. Guestbook… signatures… hut… same procedure as with us back then… next stop is Isla Perro for them. The Frenchwoman says goodbye and joins the other group. I had kinda imagined it different here… having a little more contact with the locals. Perhaps the two volunteer girls have hore luck. Everything that I was told so far is that 4 generations of the same family are living on this island and the it is actually kinda “divided” between two family members (you can recognize the “border” by the different colored markings on the palms). Though hanging out in the hammocks is quite relaxing, it sure gets kinda boring – I would really like to go diving now. About 16:00, the boat from earlier this afternoon arrives – we get our stuff and are off to the pier on the mainland. 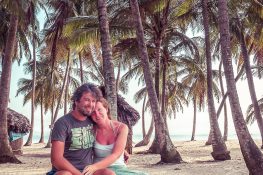