This post is part of the summary-article 2-Week Itinerary Cuba on a Budget . You can either use the links in the summary to get detailed information about each place in the itinerary, or the floating bar at the bottom of the page to navigate through each day.

I could almost swear it was pouring the whole night yesterday – I really hope we won’t get that much bad weather at the ongoing trip during the day… We arrived before Hurricanesaison here, so it shouldn’t be so bad, right? We pack our stuff – and have to hurry with breakfast. Incidentally we mention the “Cooperativa de Tobacco-experience” we had yesterday. Roly has to grin: That is really an ancient ploy to trick tourists – if we want to buy cigars, he tells us, we should do it in Vinales anyways, since we can choose between many different brands which are either packaged in boxes or individually and we can be sure that we get good ones. The downside is, that we have to carry them around for the whole remaining trip… Roly calls us a taxi. While we are waiting on the balcony, I can see the fallen stonework on the street below – this could have ended our trip quite abruptly. 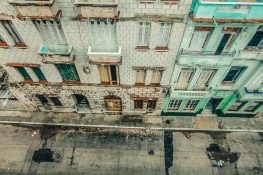 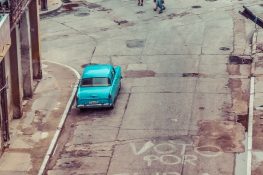 The taxi driver takes us for 10 CUC (10.00 USD) to the bus station – we had written down the times of the Viazul buses beforehand and are quite early. Tickets to Vinales are 12 CUC (12.00 USD). On a poster behind one of the desks, I discover one of the oldest memes: Limecat. I can now fully entrust this bus company with my life*. 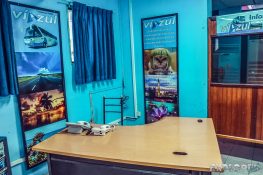 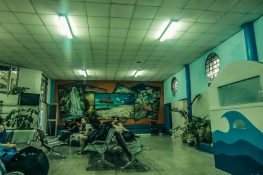 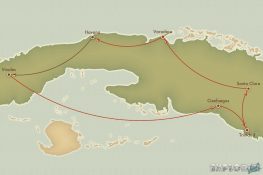 9:00 – We start right on time, first through the streets of Havana, then to the Autopista. This road seems to be a mixture between country road and highway: Some “kinda” three-lane road with a kind of “emergency lane”, but it seems you can actually drive on just a few of these lanes: A lot of potholes, partly patched up, having missing road markings and a colorful mixture of all kinds of vehicles driving on it (non-motorized vehicles included). Hitchhiking seems to be quite common in Cuba. Usually you get to see lots of people standing at the edge of the street, waiting for a ride (and signaling by waving with bank notes that they could also pay). This seems to work rather with (collective) taxis however…  I’m noticing a particularly positive way the cleanliness of the road trenches. There are lots of other countries you can find lots of carelessly thrown away garbage. Not in Cuba. Strange. We make a short break at at a service station near San Cristobal before heading towards Pinar del Rio. Some of the passengers get off here – we continue to Vinales.

The bus stops at the market square in front of the church – right at the huge crowd that seems to be waiting for us: The jinteros (touts), which are eager to get new tourists to different Casa Particulares – of course for a commission from the host, who then rises the price for the guest. Bad luck for you guys, Roly gave us 3 business cards from people he knows here before our departure – completely non-obliging, so we can have a look and stay wherever we like . The touts are quite pushy though – since we did not book anything in advance, no one expects us with a name sign… So no one seems to believe us that we are not interested in being brought to an accomondation . Oh well. 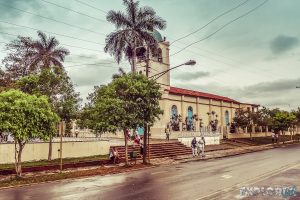 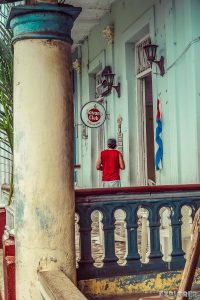 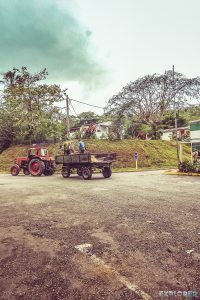 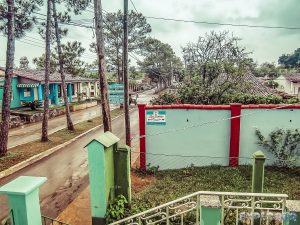 We pack our stuff and head to the first Casa of the Top 3: The owner here is an older lady who also doesn’t mind to cook a bit more when having guests. Real Cuban food? Of course! Apart from that, the Case seems to be almost in the center of the village. The old lady is super open-hearted and has a free room for us. Perfect! We unload our stuff in the room and get shortly called by Aleida, our host. We can get the paperwork done on the balcony table – with some welcoming Mojitos waiting for us . Those have been just made by her granddaughter, who joins us – not bad at all. Sweeter than the previous drinks we had and without being stingy with the rum – delicious. We have a chat in some sort of “Spenglish”, but we can understand each other. When in question we add some gestures to everything. Jep, my Spanish is still quite horrible, but as soon as you try to at least speak a bit Spanish, the people here light up and start chatting with you (often like a waterfall though)**. It is still quite early – and there is also a hop-on-hop-off-bus we can take to see a bit of Vinales. Aleida tells us that if we hurry we could make it to the station in time – the next bus should arrive in a few minutes. We have not really planned anything yet, but you can still use the rest of the day. 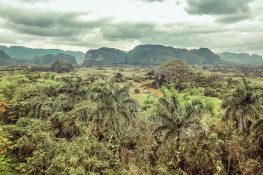 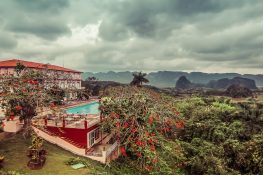 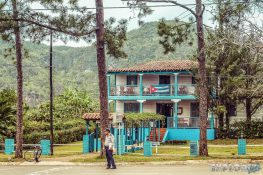 We say thank you and head towards the stop, which is just about 40m from the Casa. The bus arrives shortly. For 5 CUC you can hop on and off the buses till 19:00 (last tour). First, we arrive at the Mirador of Vinales, next to the “Hotel Horizontes Los Jazmines”. From here you have a great view over the valley of Vinales with tobacco fields extending till the far mountains, some small huts and woodlands in between and the rocks in the middle of the countryside. We take the next bus in the other direction and drive again through Vinales, until we reach a country road which leads to some dripstone caves. We are too late for visiting those, but maybe could just rent a scooter tomorrow and drive here. We make a short stop however at the huge “Mural de la Prehistorica”, which was drawn about 50 years ago. Since we think that this image looks better from afar, we decide that it isn’t that necessary to pay the entrance to have a close up look. The next bus brings us back to Vinales. Aleida greets us warmly and asks whether we want to have breakfast and dinner tomorrow – unfortunately, we cannot have dinner at the casa today, since she doesn’t have enough ingredients for two extra people. With pleasure! We had already learned from Roly that their cooking stills are great . However she gives us the tip to go to a restaurant down the road, almost to the city limits. Alright – we hurry up since our stomaches are already growling. “If the locals eat here, it must be good” – Indeed it is. Since I want to try some Cuban cuisine I order “Boliche” – fried beef in a chorizo ​​sauce and hard-boiled eggs. Delicious. 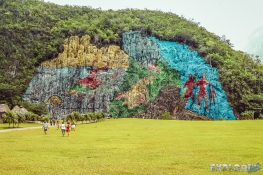 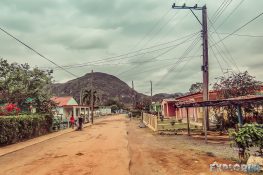 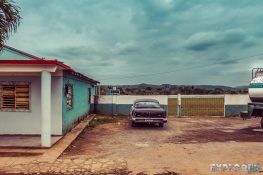 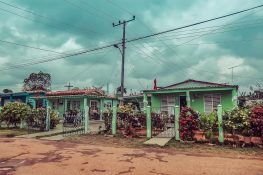 *The ultimate god of cats everywhere. His head is capped by a natural outgrowth known as the “Mystic Rind”, which originally was a solid lime. During the epic battle with Clock Spider, several gashes were rent into the lime, creating a bang-like effect. Limecat responded by chewing off the Clock Spider’s ninth leg and cast it into the sky, where it became the God of most religions. Limecat is seldom pleased, and only his priests have ever seen him do anything more than frown and glare. He has an illegitimate kitten, Linecat, who is marked by his lack of hair apart from his head and paws. Limecat is our lord and savior. All hail Limecat.

A slow day in Varadero

The Flamingos of the Laguna de Guanaroca

Cienfuegos – Pearl of the South

Havana’s Chinatown and the Camera Obscura

Interesting Vinales! So there’s more to Cuba than just Havana!
By the way i was just wondering why the conversion in Saudi Riyal?! ??

Indeed there is! I’m just about to get my initiary for Cuba finished . As for the Saudi Riyal-conversion: I have heavily edited my theme to match the prices I write to the currency of the visitors location

Oh..that’s great! Thumbs up for the effort of ur website! ?
Good luck on your Cuba itinerary! Happy travels! ?

Vinales seemed really interesting. The hop on hop off bus tour seemed like a great idea to spend the day. How many days did you spend here?

Thanks Marvi! We spent 3 days there and went on to Cienfuegos. I’m about to finish writing the whole initiary right now (or lets say: Translating from German to English and adding pictures )

Lovely photos & post, brought back memories ! I visited Viñales on January. We opted for a few hours of “Caballos ride”… Viñales is a small, quiet town with colorful houses We also really enjoyed seeing locals rocking quietly on their front porches while smoking a cigar ! What’s your next stop ?

Indeed! Life was going slowly in Vinales and we enjoyed it a lot. My next stop will be Indonesia, yet not quite sure where exactly. I’m returning to Bali but prolly going Lembongan to scuba, then either Lombok or Komodo & Flores… We’ll see

Very nice and inspiring travel stories! I particularly love the details about human interactions! Cuba is becoming a hip destination which doesn’t play always in its advantage, therefore I am always curious to check candid stories.

When I hear Cuba the first think that comes to my mind are cigars, and really, the good ones. Lately Cuba is getting more and more tourist and it starting to catch my attention, the bad thing is that it’s really far away for me. Well someday… 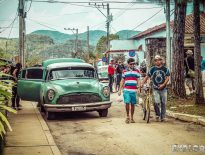 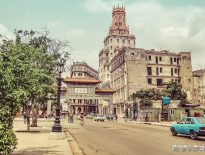